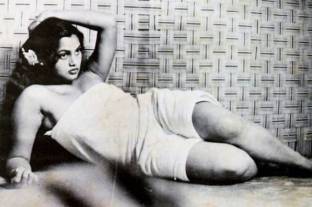 I first saw Silk Smitha in Halli Meshtre and got impatient with the camera which took forever to show her face. Unfortunately, in all the songs that followed, that camera remained and so did the man behind it. Same man, same camera. They were interested in her face only when it was accompanied by the sounds of moaning. And in more ways than one, the Savarna feminist aka the saree-bindi feminist (I will forever love you for coining this, Darde-discourse) is no different from a man like that.

They both see what they want to see: a site to perform ‘perversions’ that won’t be performed on a ‘purer/fairer’ body or an opportunity to rescue a “poor, hypersexualized, lower-caste woman” who might not know better. (I don’t have to explain why I am more uncomfortable with the latter)

All I can say is that if you’re having sex, neither the man behind that camera nor the saree-bindi feminist will care about your pleasure. They will come and go.

Is there another way of looking at Silk Smitha then? She doesn’t make it easy to answer this and maybe she doesn’t have to. What she still brings on screen are possibilities that are not easy to confront. What do you do with a woman who has paid so much attention to a body alone in pleasure & its need to submit to shamelessness — that she is able to imitate the same tremor, bend, gesture, and moan when not alone and for a roomful of crew and cameras?

At the end of Love me allow me to love you, the ‘actual heroine’ of the film arrives to watch Shankarnag and Silk Smith rolling on the grass in some park, hugging and kissing. She tears them apart, calls Silk Smitha a ‘dirty bitch’, slaps her and throws her into a pond. Many have pointed out that this was the tragedy of Silk Smitha – that despite the power she held over men and women alike, she was, in the end, alone. They will say this but they won’t acknowledge caste in this. Silk Smitha’s loneliness is not very different from the loneliness of Dalit and Bahujan students who are murdered in institutions.

But I’d like to keep her alive in other ways too – by imagining & believing that she pissed people off because she taught savarnas how to have better sex. By acknowledging that no other actor was able to achieve what she was able to, that she single-handedly recognized the uselessness of savarna men. Whether it’s Ravi Chandran, Kamal Hasan, Rajinikanth or Shankarnag – all the men she acted with are so similarly boring that they are all easily interchangeable. Take all their songs, exchange the men – it won’t change a damn thing. What you’ll still see is one Silk Smitha, shining. Always.