My last entry was about discovering Proust, and waiting for the biggest heartbreak of my life to read him. In a strange twist of one ankle, two steps and a rainy evening – this has happened. I broke my leg on Tuesday and am now convinced that it is worse than all the heartbreaks I’ve had. When the heart is udhas, one can at least do karvaten badalna as they beautifully say in Hindi –  tossing and turning on the bed (its dabba English equivalent). When the leg is gone, what can you toss, when will you turn, how can you mourn?

I was watching Zizek (bastard) when I realised I hadn’t signed out. Took an umbrella and went down the stairs. Slipped on the last two steps and my bum fell on my ankle. I was beginning to think ok now I will  get up quickly before someone sees me while my ears caught a different horror altogether. They heard something creak.

I moved my foot and tried standing up only to fall back on my bum. It seemed as though there were no bones in my left foot and everything had dissolved into jelly. I writhed in pain for a while before gathering myself into a heap in one corner. 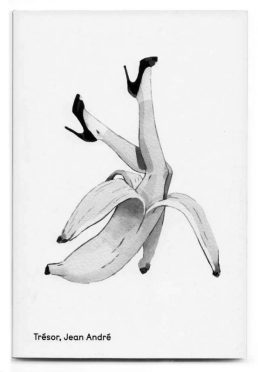 Cut to Wednesday, I am lying on the operation table, head foggy with anesthesia but still finding the courage to blame Proust and Zizek for all this. Proust because he said something about how we never know the value of a vehicle and are never really curious about its inner workings until it breaks down. Pliss ok Proust – when I read that, the first thing I did was touch my hands, eyes, feet, hips and feel grateful. And Zizek because just. I felt the surgeons hammering something into my foot but I was more bothered about an itchy nose and my newly heavy hands that refused to move.

I am in Payannur now, recovering slowly, feeling helpless and useless. Read two pages of Proust and felt cheerful. Then read more of Wolf Hall and got frightened. Mantel is a goddess. The first chapter made me cringe but in a hungry sort of way– all those brilliant one-liners about blood and breaking bones.

I cannot walk for a long time. But for now this is what I can see outside my window. 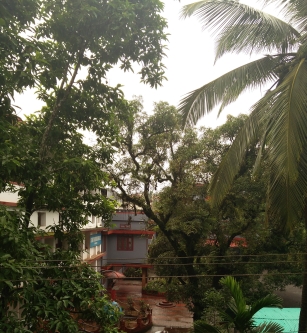 I hope that for as many heartbreaks and leg breaks that come my way – there is always a window nearby.