Lalbagh has been the cause for many embarrassments in my life. The first time I saw it, I saw it two times but it felt like four. I had no idea there were 4 gates and sitting next to my friend in the bus, I saw the west and east gates in fifteen minutes and asked her if the driver was taking us round and round. Supriya slapped her forehead even as she struggled to keep from laughing rudely in my face.

She explained and I said, ‘oh’. Then I moved on with my life.

Many years later, my then best friend began frequenting Lalbagh. She’d sit there for hours, sometimes the whole day. She’d order from Dominos, eat cheese garlic bread and watch the lake. I never understood what she sought there but she went there every day. Whatever she sought, she must have found abundantly. She tried to get me to enjoy the quiet there and I did enjoy it, but it wasn’t something I wanted too much of. Now that I think about it, Josephine is probably the only woman from my past who knew how to be alone and enjoy it. 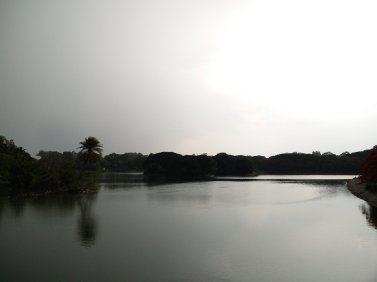 One day in Lalbagh, Josephine and I were sitting on the bench and preparing to leave when suddenly, she grabbed me by the arm and started to whisk me away. ‘Whaaaat’, I moaned. ‘Don’t look back. Whatever you do, do not look back’, she muttered. So I looked back. A man who had been sleeping all evening had woken up and was now pleasuring himself quite ferociously. Like there was no tomorrow. The phrase ‘going to town’ came to mind.

That man effectively ruined our hitherto chaste friendship. We had never talked about bodily things before and suddenly we found it difficult to return to Lalbagh together.

After that unfortunate incident, I forgot all about Lalbagh and it went back to being that part of the road that smells nice when I ride past it. Occasionally, I’d give it a cheerless nod and bookmark it for the future.

Today, it rained so I thought why not and swerved right on Siddapura Road to park suddenly in the middle of actual riding. I parked and wondered if I had to pay. There was no counter so I walked on, looking back every now and then and half expecting an old man to come running after me, yelling at me to pay. Nobody came.

When I began looking around, I realised how afraid I am of my own thoughts. Every time a long walk is in the cards, I pack my ipod before anything else and rely too much on music to keep me away from myself. But the only music here was the crunchy footwear sound that I have come to appreciate so much. The after rain footwear on part dry crunch-crunch mud sound, like the sound people in cartoons make when they eat anything.

The traffic noise seemed to be coming from an approaching city. It was drizzling and it seemed like the trees were making their own noise. Men in smart colored tees were jogging past me with their hoo hoo breathlessness. Somewhere an urdu speaking aunty was instructing her daughter to forget the ball forever if she dropped it into the lake. ‘Gaya tho uthech, bhoolna so’

The lake became more and more real as I saw the birds near it. The faint traffic noise now seemed to be coming from above. I walked to the Lotus pond and trained my ears to pick up coastal sounds of frogs croaking. One, maybe two and then suddenly nothing. But the trees were having fun and continued making their rustling noise. I was understanding Josephine and began missing her terribly and missed also that outrageous man who molested himself.

It was a good day.